Texas House of Representatives at Christmas 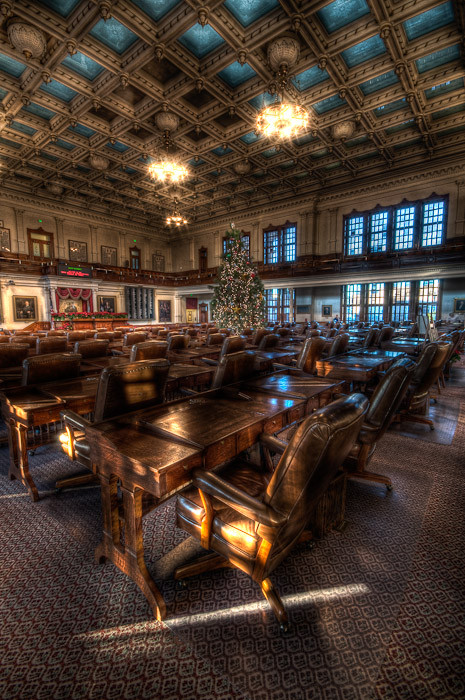 I reckoned I could get away with posting one more picture which has Christmas overtones. This is the House of Representatives in the Texas State Capitol building in Austin. Oddly enough, it has a large Christmas tree in the centre of the floor each year. This doesn’t worry me in the slightest but I was surprised to see it given all the ”separation of church and state” stuff going on these days.

I’ve taken a load of pictures inside the Capitol since it’s a wonderfully photographer-friendly place. Despite lugging large tripods and bags full of gear, I’ve never been stopped or questioned at all. This particular image was taken during a photowalk organised by Pete Talke (of Places2Explore blog fame) and the Austin Photography Group. We had a great time and I managed to meet quite a few of the local ”Austin HDR mafia” who I had previously only known through their images and Flickr IDs.

This is a 4 exposure HDR processed in the wonderful 64 bit version of Photomatix Pro 3.2 and then touched up in the equally magnificent 64 bit version of Lightroom 2. I’m absolutely stunned at how much faster the 64 bit versions of these apps are running on Windows 7 64 bit compared to the 32 bit versions on my previous machine. Photo editing is a pleasure one again after about 2 years of twiddling my thumbs waiting for effects to render!