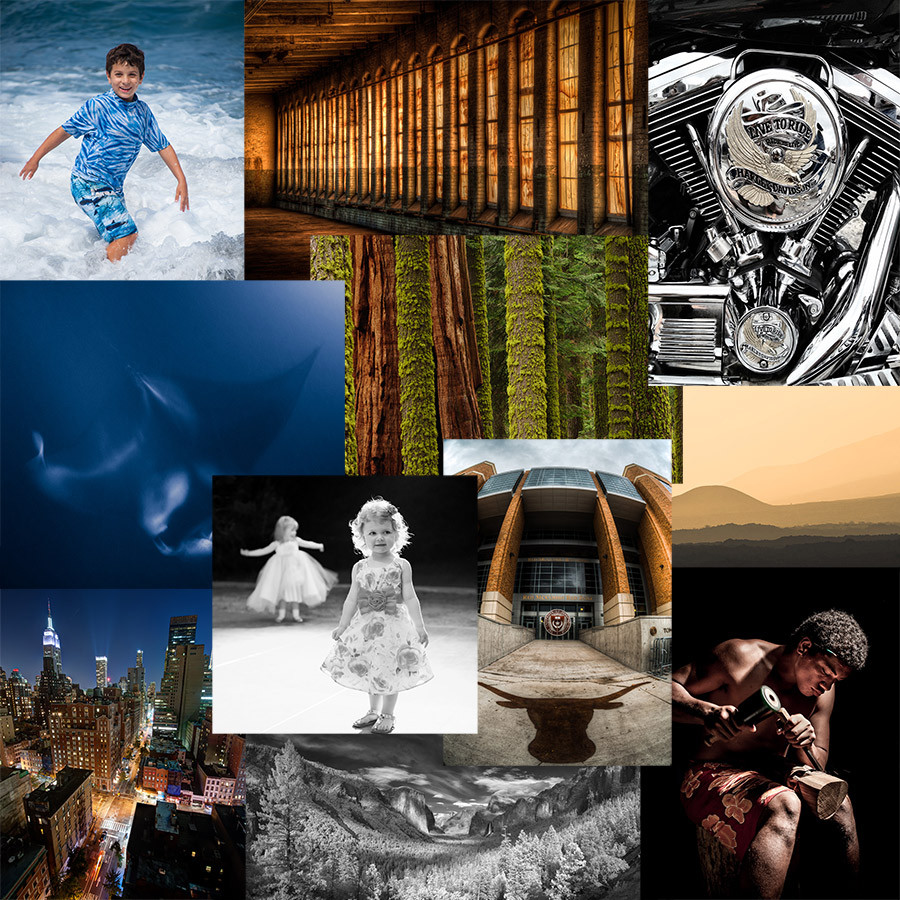 It’s the time of year when I once again take a glance through my Lightroom catalog and see which images from the last 12 months stand out. This year, my catalog grew by 16,063 to just a shade under 70,000 pictures. The year’s tally will likely reduce since I still have quite a few Formula 1 weekend images to cull but, even taking this into account, it comes out to something like 1000 new images each month which is a lot higher than previous years for me. Most of this comes down to the fact that I shot quite a few more events than usual and also had several trips where photography was a major part of the experience (more of which later).

Highlights for me this year included my week-long trip to California to photograph landscapes in Yosemite and Sequoias National Parks, an amazing family holiday to Hawaii in the summer, a business trip to Boston which included a lot of time for photography with friends, a long weekend photoblogger get-together in Portland and shooting the first Austin Formula 1 Grand Prix (with a press pass for all the downtown concerts and entertainment thrown in).

Anyway, without further ado, here are my favourite 10 images from 2012. These are in absolutely no order at all. Click on any of the images for a larger version.

In April, I spent a week in the company of Raul Touzon and 5 other photographers shooting in Yosemite and Sequoias National Parks in California. Wow – what a trip! If you’ve not visited Yosemite, please add it to your bucket list since it contains some of the most breathtaking views you will find anywhere on the planet. I ended up with many, many pictures I’m delighted with but this is one that really stands out for me since it’s one of the first really successful panoramas I shot with my newly converted infra-red camera.

I love this image, also from the Yosemite/Sequoias trip, due to it’s simplicity and texture. The contrasting size and colour of the huge sequoia behind the lichen-covered redwoods really helps bring home just how enormous these trees are (even though the redwoods are actually taller than many sequoias).

Nikki and I traveled to New York for a long weekend back in October (exactly a week before Hurricane Sandy hit the area). I didn’t do a lot of photography but I did shoot some midtown skylines from the rooftop bar of the hotel we were staying at and I rather like this one. The rays of light rising from the building in the centre were a surprise to me. The first I noticed them was when I was processing the photo.

Our summer trip to Hawaii was undoubtedly the holiday of a lifetime and, of the many pictures I took there, this stands out as my favourite. I saw this scene one morning while driving north from Waikoloa and kicked myself for not stopping the car and taking the picture. Thankfully, the view was every bit as amazing the next morning and I didn’t make the mistake of missing the second opportunity. As with the sequoia shot above, the beauty of this picture to me is in the simplicity. Mauna Loa is a huge volcano as you can probably see from the final layer which represents the main volcano itself rather than foothills and secondary craters.

This image was taken in available light at night during a luau in Lahaina. The sculptor was creating tikis to sell to the tourists and was happy for me to photograph him. I shot a couple of frames with my 50mm and am delighted with this one. The boys ended up buying a couple of sculptures from him as souvenirs too.

Drew in the Surf

I think this is the first time I’ve included a photo that is predominantly a portrait of one of my kids but this is also one of my favourite pictures of Drew. I love the dynamic water (there was a pretty heavy surf on that beach), the look of absolute delight on his face, and the almost perfect lighting. This was one of those shots where I looked at the back of the camera and couldn’t believe it at first.

I’m embarrassed to admit this, but this picture falls into the ”happy accident” category. My Canon G9 in its underwater housing just wasn’t up to the job of getting anything like a sharp picture during our night snorkeling trip off Kailua-Kona but I was fortunate to get one unsharp image that I really loved. Although this image is obviously very blurred, the subject is also most definitely a huge manta ray and the blur lends a wonderful air of mystery to the shot, I reckon.

I hesitated to include this picture in the list partly because it’s so basic but mostly because I took it with an iPhone. I love the overall feel of the shot, though, so here it is. It shows the engine block of a rather shiny Harley Davidson motorcycle seen downtown during a photo walk we had in the Spring.

One of the photographic highlights of the year for me was a day spent with Bob Lussier exploring the historic mills of Lawrence, Massachusetts. I brought back a ridiculous number of exposures, most of which I have yet to process. It was an amazingly creative day. Bob and I have similar photographic interests and we spent the whole day feeding off each other’s enthusiasm and stealing each other’s compositions. Of the pictures I’ve processed so far, this is, I think, my favourite. It shows the canvas-covered windows on the top floor of Everett Mill.

Imagine that – I have two portraits in my top 10 for the year! This shot was taken at a rather good wedding Nikki and I attended. I wasn’t one of the photographers (of course, since I don’t shoot weddings) but I took a camera and a 50mm lens along and took some candid black-and-whites. Of the evening’s pictures, this one stands out head and shoulders above everything else for me.

OK, this is number 11 in my top 10 but think of it as a bonus image which I’m throwing in purely because it won the competition for best photo from the Scott Kelby World Wide Photo Walk in Austin this year. I’ve shot a lot of images with my fisheye lens in the couple of years since I got it and this is one that I feel really benefits from the super-wide, distorted look.

I was hoping to see a some NorthXNorthwest represented! That Manta shot makes up for it…great year Dave!

Part of the reason that the NxNW trip isn’t represented is that I still have so many shots to process from that weekend! I could easily have published a “Top 20” even without that trip, though!

Great set of images, Dave. I’m glad to see one from Lawrence made the cut. Even with traveling to Nevada and England this year, your visit was a shooting highlight for me as well.

Agree with Justin – needs more NxNW love on this page… but Dave, awesome set for 2012.

A great collection. I’m new to following your blog, but look forward to 2013. Your NYC shot appears to be right by where I live. Happy holidays.

Thanks, Kris! I hope you (and midtown) survived Sandy with minimal problems. We were there only a week before the storm hit.

Great work as usual Dave. I really love the first 2 Hawaii shots of the mountain and the carver. Very different images and styles that both work beautifully.

Thanks Chris. I’m doing the same but, with 300 entries this year, I think it will take me until about July! 🙂

saw you on Jims list 🙂 Great set of photos.

Ever since I first saw the Sierra with my own eyes and not through photographs – I miss the area very much. So your Sequoia Abstract clearly has to be my favorite of your otherwise equally stunning collection. The textures and wonderful contrast of the Sequoia dwarfing the Redwood trees with their moss and lichen-covered bark is just magnificent!

Thanks David. I’m still not 100% sure about my very favourite image of the year but it would be either the sequoia abstract or the shot of the Mauna Loa foothills. I guess the sequoia shot may win since I’ve already hung a 36×24 canvas of it in an exhibition I have hanging just now!

Great images but the lighting on the Tiki Carver stopped me cold. I had to stare for quite a while as it’s such a beautiful image!!

Visiting from Best Photos of 2012 by JMG-Galleries Blog Readers

Thanks, Rebecca! I love the tiki carver shot too. It was surprisingly simple – just a quick grab with the 50mm at night during dinner at a luau on Maui. I spent a bit of time working on it but no more than 30 minutes, reckon. The result looks as if a whole lot more thought went into the shot than actually did 🙂

Hi Dave! These images are simply gorgeous. I stumbled upon this from Facebook of all places….the website “borrowed Lenses” posted this up. So glad I got to meet you on the photowalk in Austin last year. I enjoy seeing your photos on flickr….thank you for sharing your talent with us!

Thanks Tiffany! Jim Goldstein, who compiled the list, works for Borrow Lenses so I expect that was why the link was on their Facebook page.

Just coming over from Jim’s List, slowly working my way through 🙂 Some stunning and varied images Dave, looks like 2012 was a hugely successful year for you.

Great shots and a really great way to display them Dave. Best wishes for 2013.

lovely images
all the best for 2013
dinesh maneer´s last post ..Cubbon Park on a foggy morning

[…] In the past, I’ve put my year-end photography summary post here but as of last year, I moved it over to my photoblog instead. If you would like to see my favourite images of 2012, you can find them here. […]