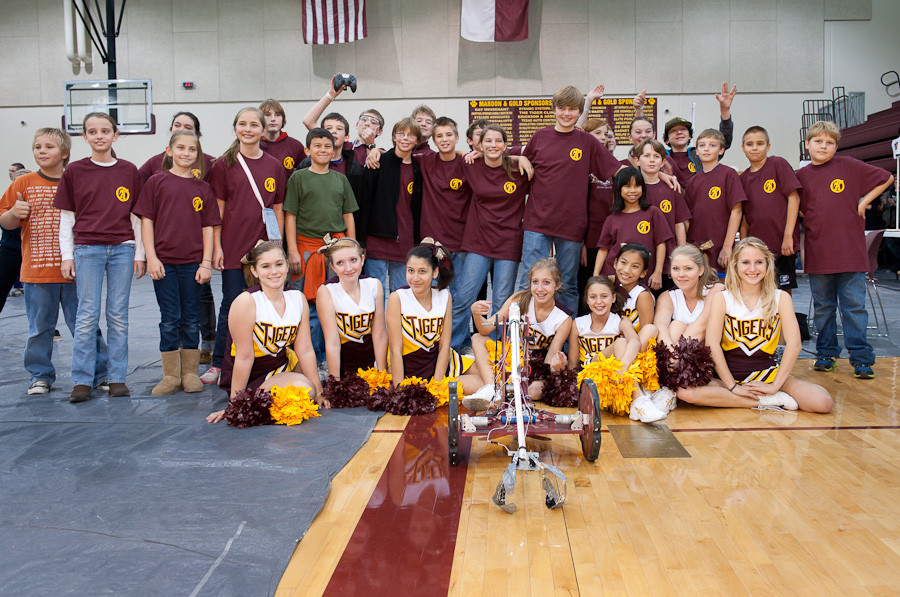 You’re probably wondering why I’ve broken the usual string of arty images and inserted a somewhat poorly taken group shot on the blog today. If, however, you know that I’m rather rabidly interested in school robotics competitions, you’ll probably get the idea. This shows the members of the middle school team that I help mentor along with the school cheerleaders who came along to offer their support.

This is an important picture for me to post today since it shows the kids of the Tiger Robotics team at Dripping Springs Middle School just before their win in yesterday’s Bobcat regional BEST (Boosting Engineering, Science and Technology) competition. They got second place in the robot event (by 1 point) and won the overall ”BEST Award” which takes into account the team’s marketing presentation, design notebook and display area in addition to the final performance of their robot in the game. This is an amazing achievement given that this is the first year of competition for the team and that none of the kids or mentors have been involved in prior competitions. I’m amazingly proud of these kids and am very much looking forward to going up to Dallas for the Texas state competition in 3 weeks.

The game that the robot had to be designed to play this year involved picking up and sorting ”bugs”. Points were awarded based on the difficulty of access to various collection bins and whether you managed to feed the collected bugs (by dropping tennis balls into the same bins as bugs). The video below shows the last round of the finals. The team was behind but decided to go for a ”Hail Mary” strategy involving getting one bug and one piece of food into the most difficult bin. It paid off and they pulled their score up enough to claim second place in this part of the competition.

Texas Through The Hats