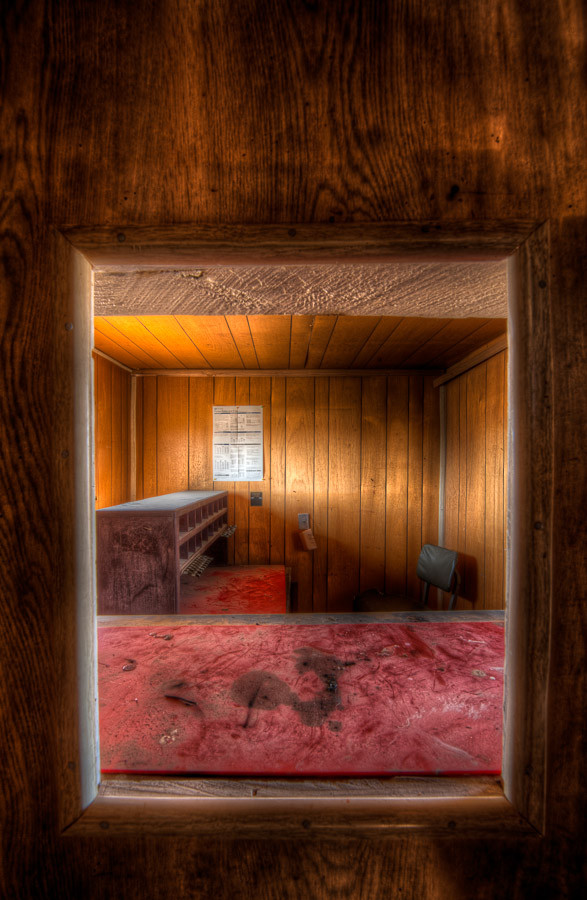 I need to set the record straight after Justin Balog’s reference to me hiding in the Cisco Post Office yesterday.

Cisco is a fascinating ghost town containing a couple of dozen buildings in various states of advanced disrepair. One of these is a former US Post Office which is unlocked and which I was enticed into shooting inside by Bob Lussier.

While I was in there (in this abandoned town, miles from anywhere), I heard a car draw up outside. This wasn’t too much of a surprise because the place had been absolutely crawling with other photographers when we arrived but the sound of a police radio and mentions of ”guys wandering around” left me rather concerned.

I’m definitely not one to go against the law and, frankly, if there’s a ”No Trespassing” sign, I stay on the un-trespassing side of it. Although I had seen no sign, I was pretty sure that I probably wasn’t supposed to be inside this building (though, for the record, the door hadn’t been locked and I had touched nothing other than the floor while inside).

I was left with a quandary – walk out nonchalantly, smile at the officer and wish him a ”good afternoon” or hunker down and hope that he went away? In the end, I mulled over this for about 10 minutes and decided the best course of action was a combination of the two. I left confidently and hung around the exterior taking more pictures to give him an opportunity to come over and give me a talking to. In the end, it turned out he was more interested in talking to a couple of youths and, despite all the trespassing photographers walking past the patrol car, not a word was said.

Anyway, after all that, this is the best picture I could manage while inside the post office. I wonder if it was worth the blood pressure spike?

Oh man, I never heard the whole story. How nerve racking! Excellent capture. With all the creaking in those buildings it just make me nervous. I was afraid someone was going to pop up as I was peering into windows.

This is sweet Dave, I will never forget the cops, I am gonna do a little post with everyone and include them as well, what a great time, cheers!
Michael Criswell´s last post ..Sunrise at Dead Horse Point