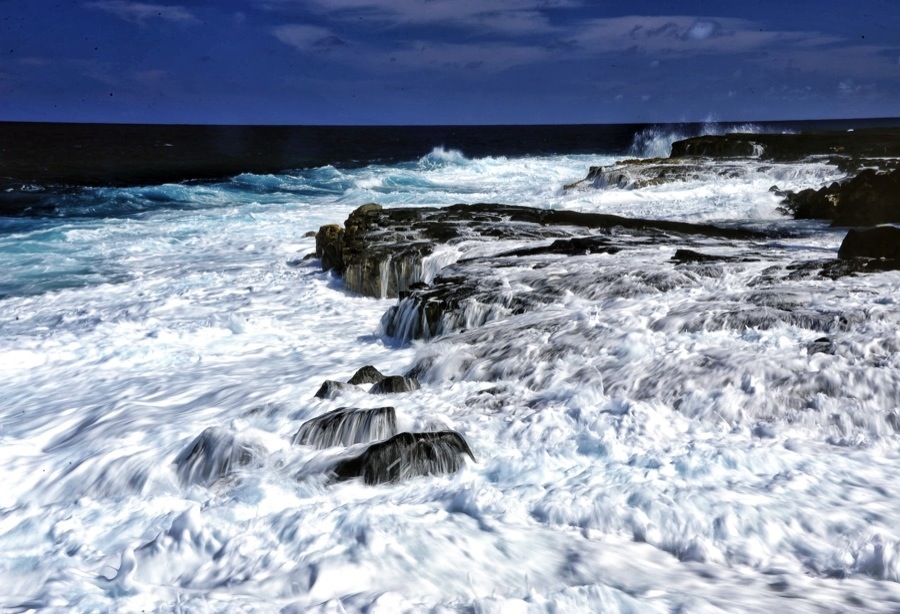 The power of the Pacific Ocean is very evident on the eastern, windward side of the Big Island of Hawaii. Waves crash into lava in a battle that the ocean will, no doubt, eventually win.

The islands of Hawaii sit in the centre of the Pacific Plate and are moving very slowly north west. Beneath them lies a soft-spot in the crust (or a hotspot in the mantle?) from which magma escapes building islands as the plate moves above it. Generally speaking, the further north-west islands in the chain are smaller with the larger islands closer to the active volcanoes. It’s fascinating to look at a topographic map of the Pacific Ocean floor in this area. While there are a dozen or so Hawaiian islands still visible above the surface, there’s a line of undersea mountains curving all the way up to Alaska. These were presumably formed in exactly the same way as the current Hawaiian islands but have all long since lost the battle with the ocean and disappeared beneath the waves once again.

Very well captured surf – just the right balance to convey the fluidity and movement in the water.
LensScaper´s last post ..Standing on the Edge

Thanks. I originally wanted to capture the initial crash of the wave on the rocks but the dynamic range was too huge to capture what I wanted so I dialed the exposure down a couple of stops for this image. In retrospect, it was definitely the right thing to do given that I had no option to shoot here any time other than early afternoon.